It's hard to describe the joy that it has been to raise this little man.  We were talking today on our lunch date that just like my miscarriages since having him, I was almost certain that we would lose him with complications.  My pregnancy with Samuel was so simple and uneventful that it totally shocked me when I started bleeding in my first term with Jo.  He has known the sadness of babies that would have been his brothers and sisters that are in heaven now and I think it surprised him to realize that he also could have joined the ranks of my children that haven't had to struggle in this world but have slipped from womb right into Jesus' arms.

I told him how I sank down in the corner of my living room in Lafayette, in a heap of tears, begging my mom and dad to pray that I wouldn't lose him.  You cannot believe my shock and amazement when on the following day in Dr. Wickert's office, we heard that tiny heartbeat for the first time.  Our prayers had been answered.  In 8 months that little heartbeat would be outside of my body and have arms and legs and a mind of its own and the terror that is the love of a mother would be all too real yet again!

Since that first day 13 years ago, raising Josiah has been a breeze.  I have never known a quieter more contented child than my sweet JoJo.  He would play with a wrinkle in his pants in his carseat for two hours without a fuss.  He's only really been sick once.  He loves home and his room and while he may not be up for all of the crazy adventures out in the real world, I know for certain he has taken more than his fair share in his imagination.

Even today, he wasn't interested in a party or big affair for his golden birthday.  His requests were simple....

1.  Skip School
2.  Have Cocoa Wheats for breakfast (with toast for dipping)
3.  Visit Grandparents for love...and the cards with money in them!
4.  Finish the evening with carry-in Mexican food and a movie at home.

We did them all.

Unlike Samuel, who is chomping at the bit to get out of our house and venture as far away from Danville as he possibly can...Jo is already worried about having to move out.  When asked what his goals are, he unashamedly declared that he wanted to live in the house beside mine and that he was never going to put me in a nursing home...and I haven't once asked him to care for me when I'm older!  That is all his own.

I asked him today as we were riding around what he would change about himself if he could.  He admitted that he would get rid of his struggle with anger and lust.  Lust, specifically, for more things.  I asked if he would change anything about his appearance and he corrected me that the outward man was made up of God-given characteristics that were only his and he would never change that.  (Humbly, I must admit...in all of my years of wishing for a beautiful face or a perpetually thin body-Jo's philosophy never has truly occurred to me!)  He then went on to tell me that his cute face was his "bread and butter" and he would never touch it for difference!

After driving him around from one pawn shop to another, looking for a much desired xbox 360 that neither he nor I can afford, he stopped me and told me how thankful he was that I was taking him.  He knows that I don't much care for gaming stores.

So, we did breakfast and Meijers for a new hoodie, both grandparents got a visit, lunch at Benjamin's and then pawn shops and ended our day grabbing Sam up at the school.  I love my Sambo but I was sad to see Jo climb into the back seat of my mustang to make room for his older brother with much longer legs.  When I looked back at him in my rear view mirror, I thought...that just sums up Jo in our little family.  Just a quiet guy, that's willing to sit in the back seat.  He doesn't have much to say and doesn't need much to entertain him.  He's got his own bucket of wisdom but you may never know it unless you sit down at lunch, just the two of you, and pry it out.  He's loving and sweet and very compassionate.  He is very much his father which is why I think I enjoy his company so much.

My sweet JoJo...on your 13th birthday, this is what I hope for you:

That you always love home as much as you do now but that you become willing to go anywhere that Jesus sends you even if that is very far away from us.

I hope you never feel the pressure to be like Sam.  You are your own person, with your own gifts and God is dreaming way bigger dreams for you than you can imagine.

I hope you always draw and find that to be comfort to you.

I hope you find the victory that you so long for to overcome the sins that beset and burden you.

I hope that you always continue to make the bed even when you have a wife and family because you are so good and stinkin' faithful at doing it everyday to the rest of our shame!

I'm fairly certain that you will always keep your legos and struggle with sharing them-even with your own kids, but I never want you to lose your young heart.

Most of all, though, I want you to be God dependant.  Trusting only in Him for everything you need or desire...loving Him more than you love me or your dad.  It is with Him alone that you will always feel truly at home.

We love you, Jo.  You have made our lives so wonderful. 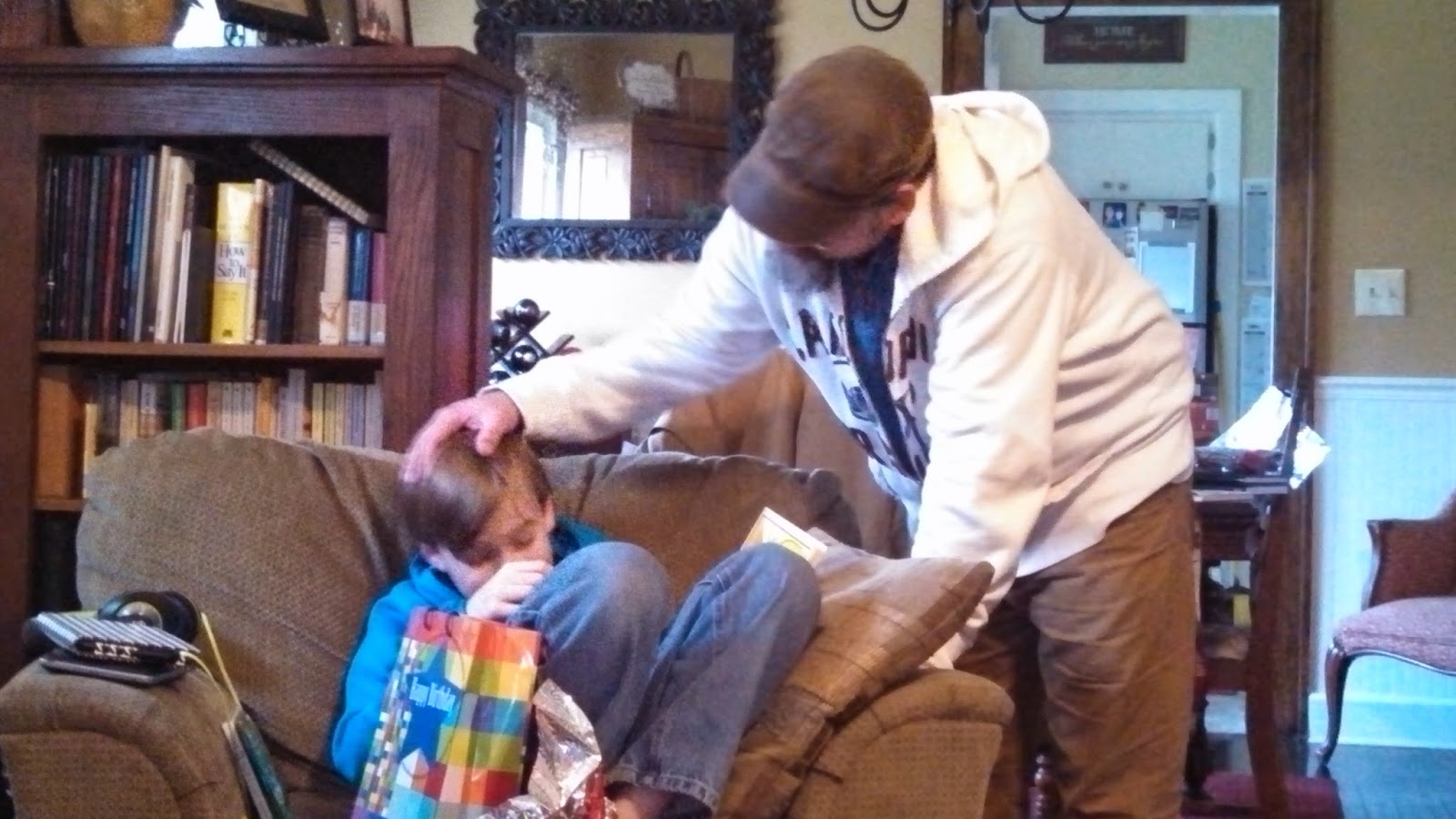 Matt giving Josiah a "blessing" as he enters manhood. 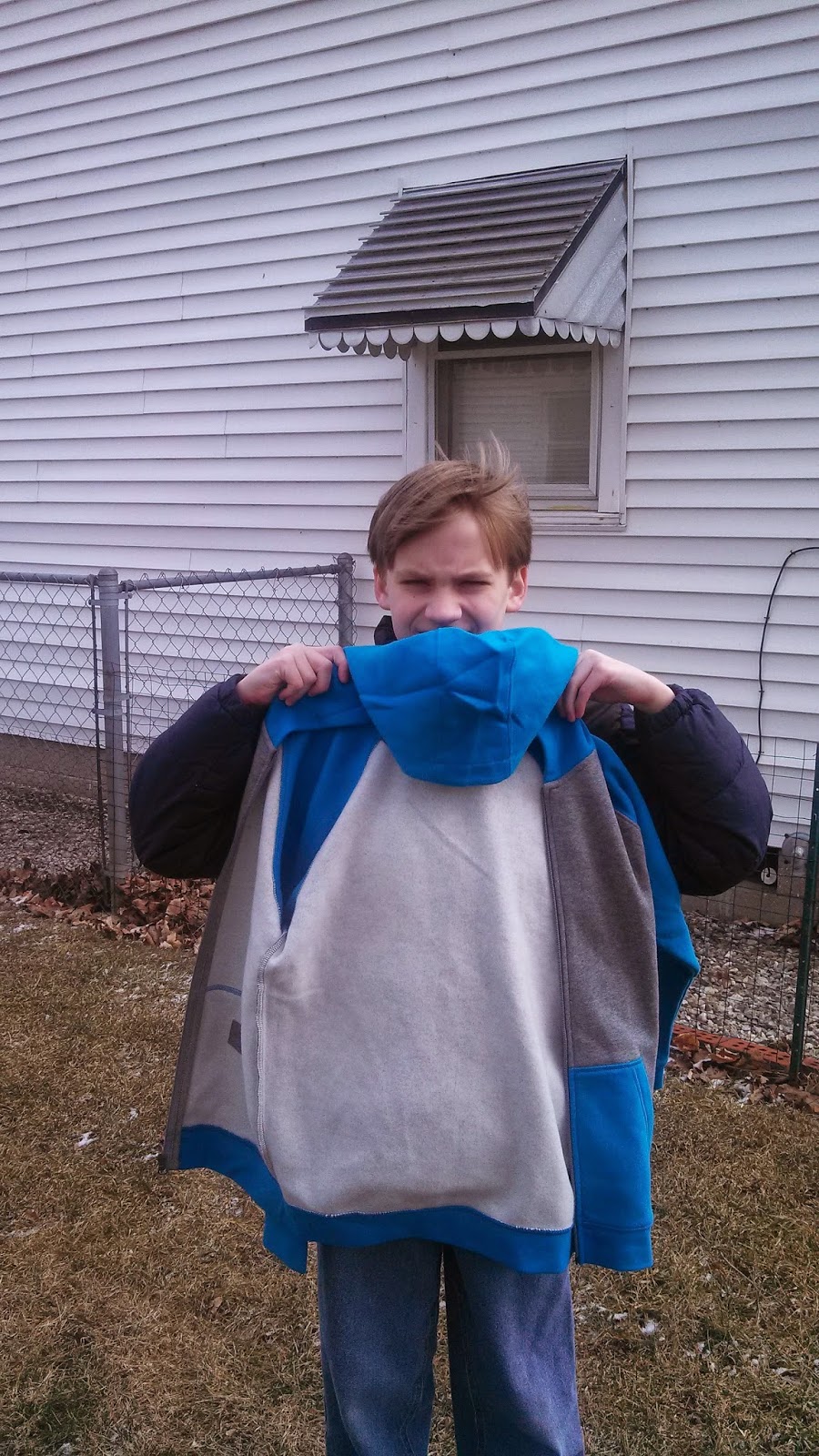 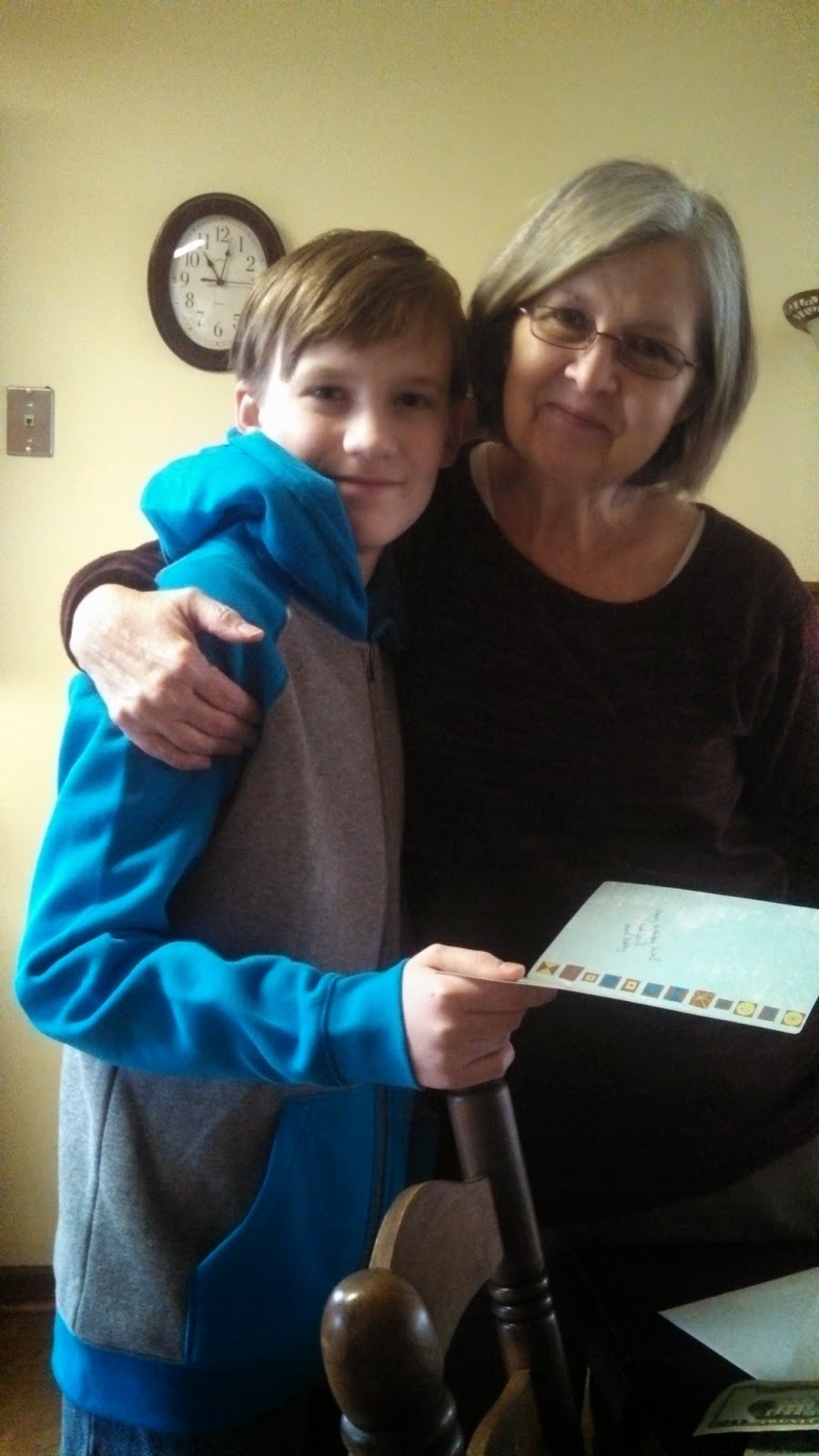 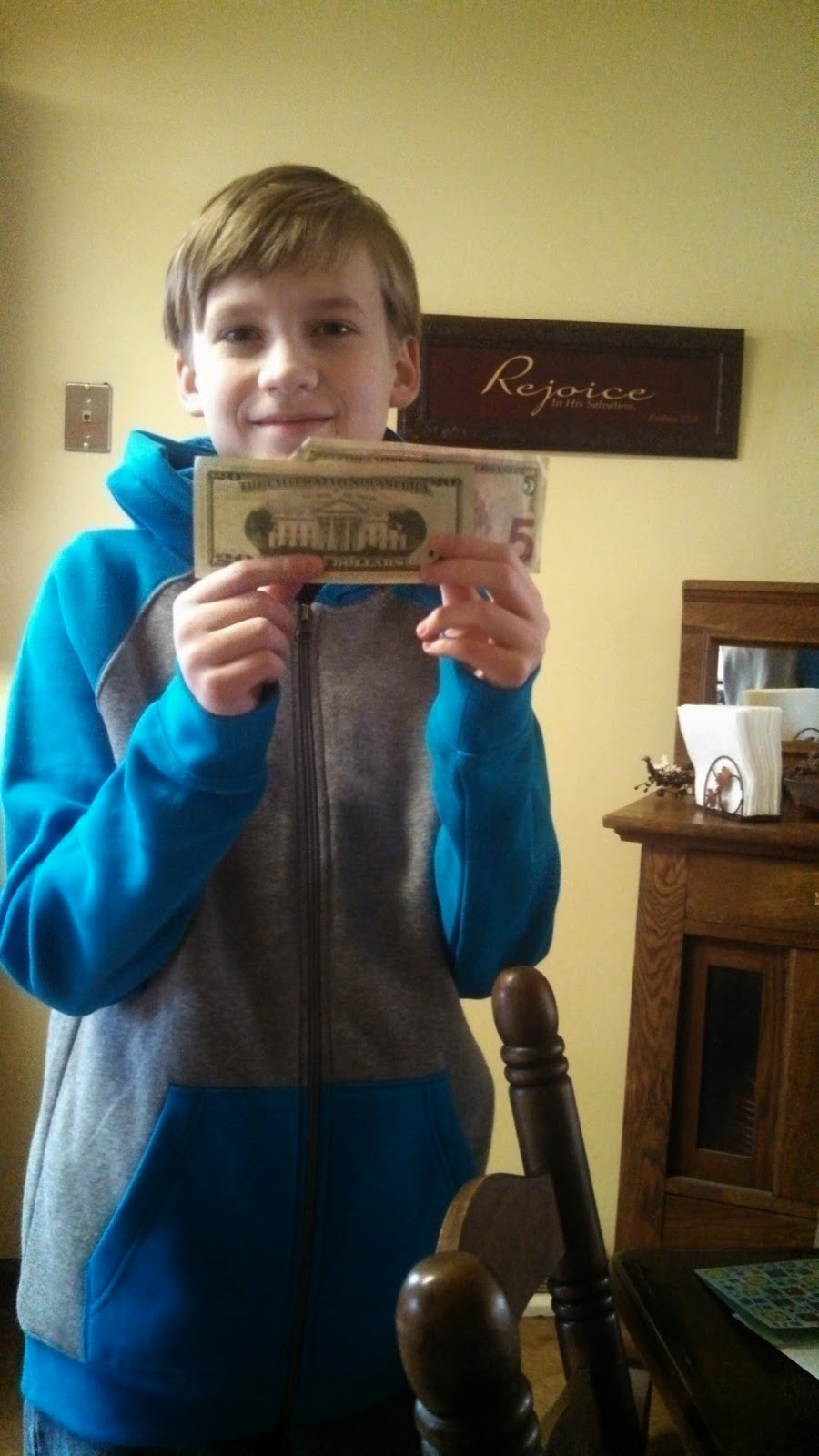 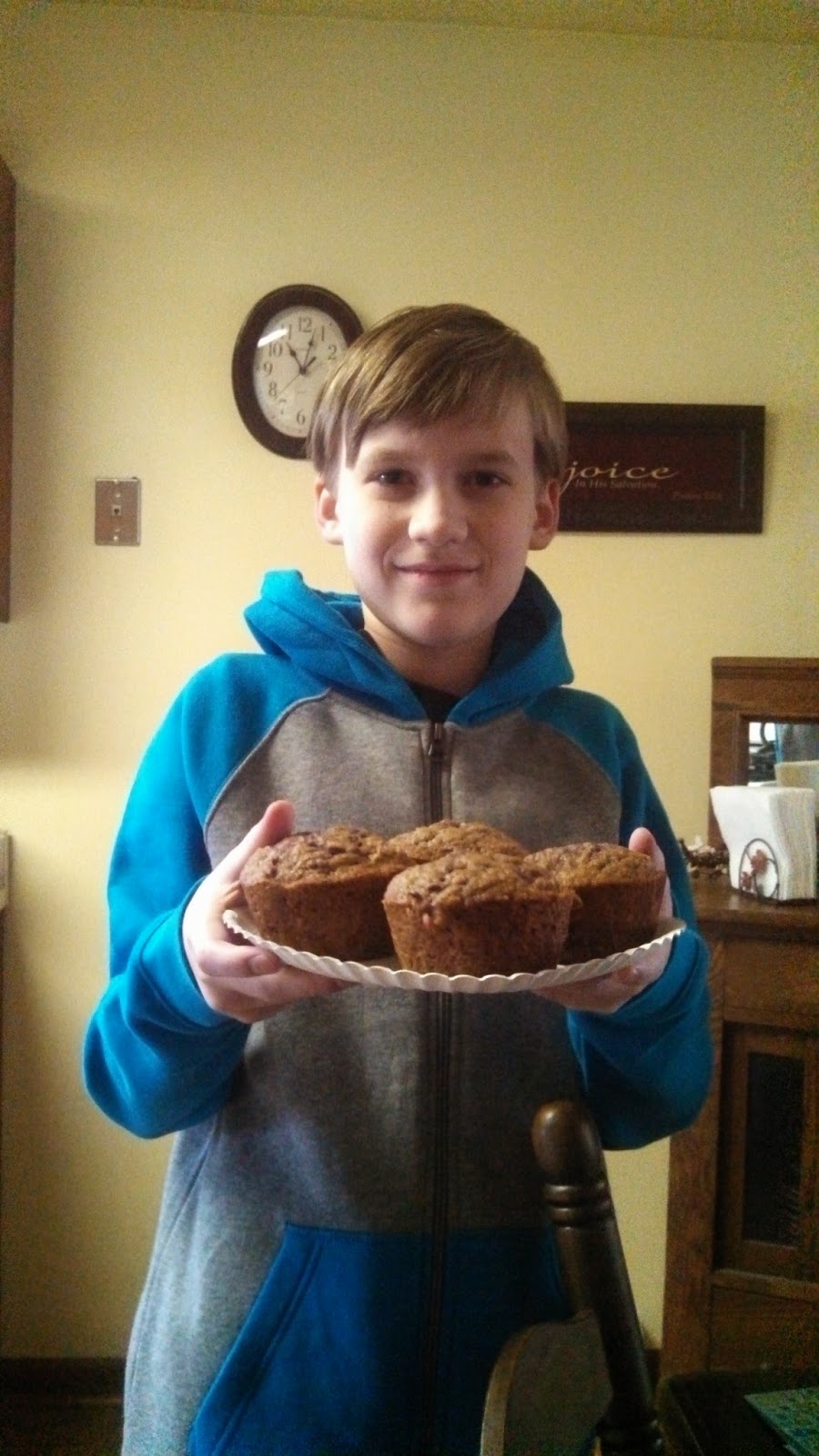 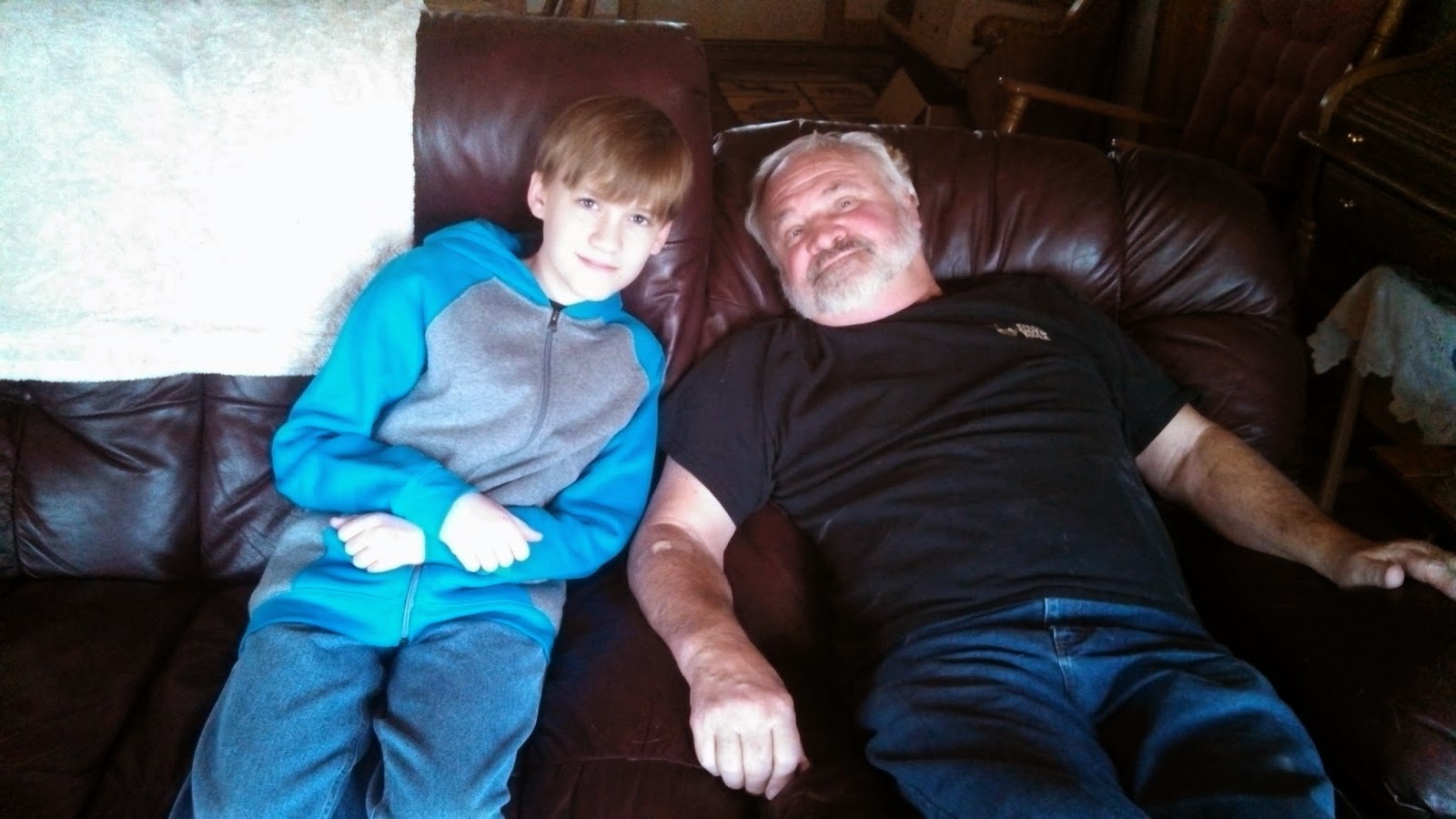 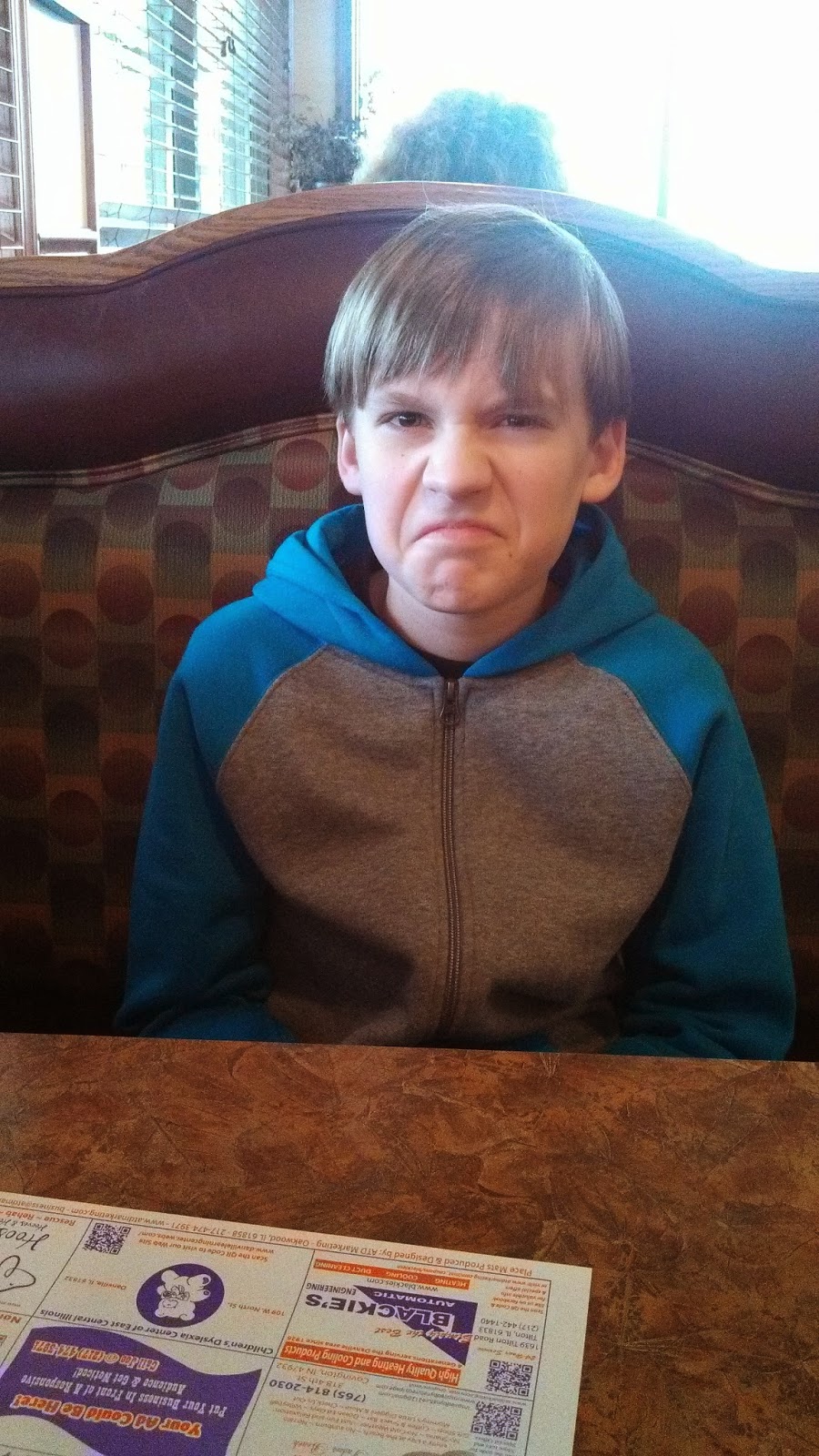 Grumpy Jo waiting for his cheeseburger 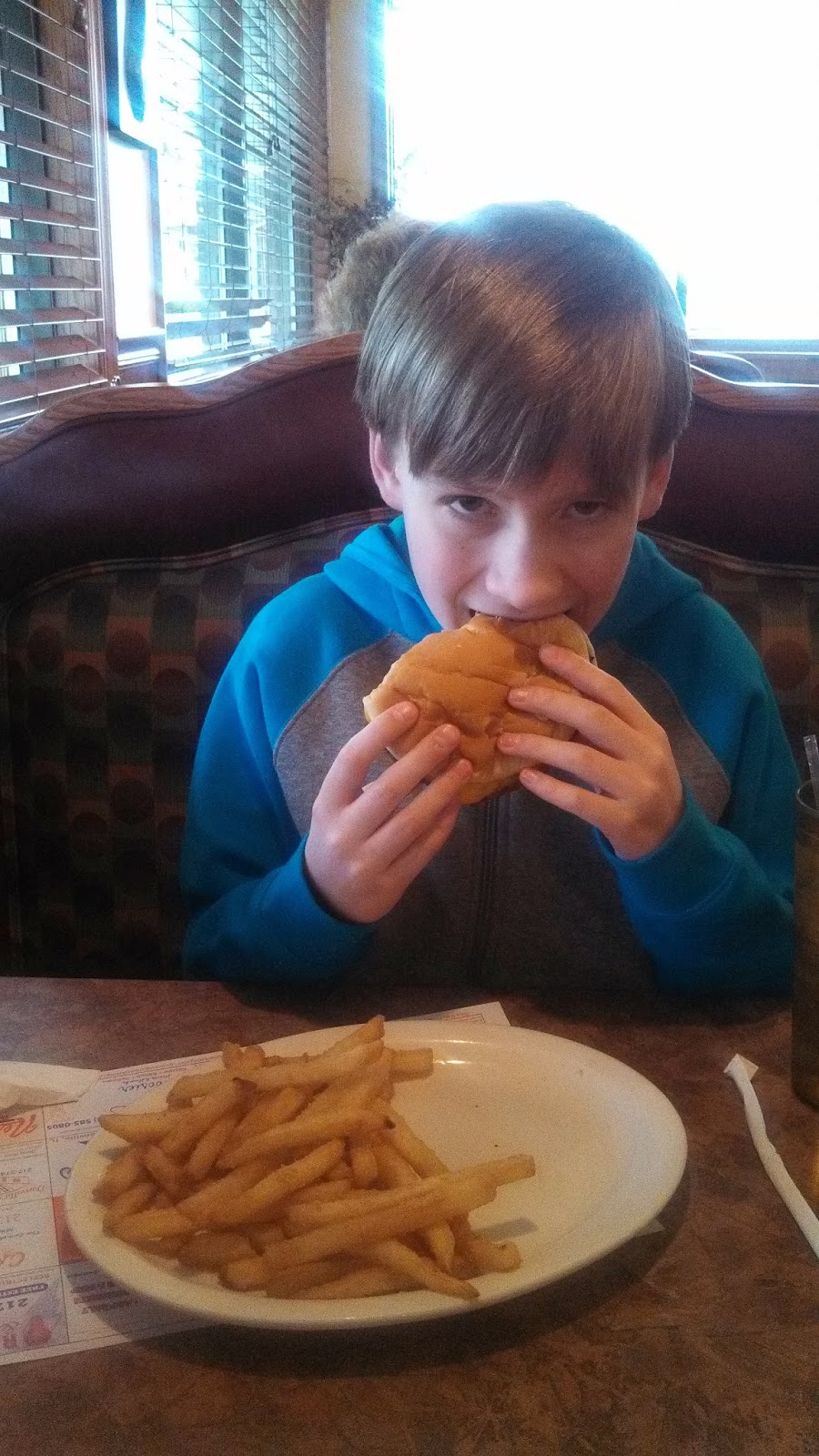 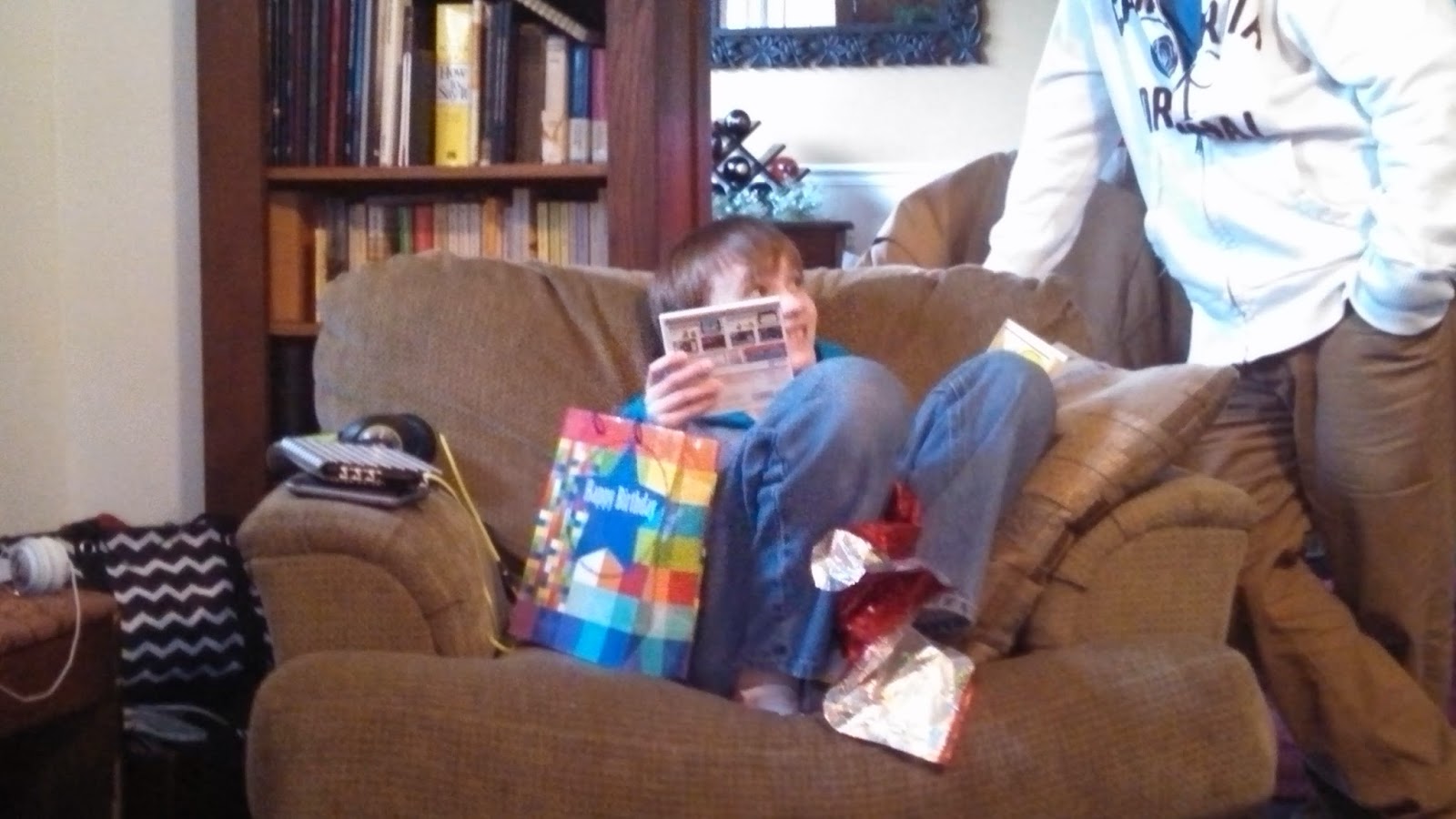 Gifts from Mom and Dad 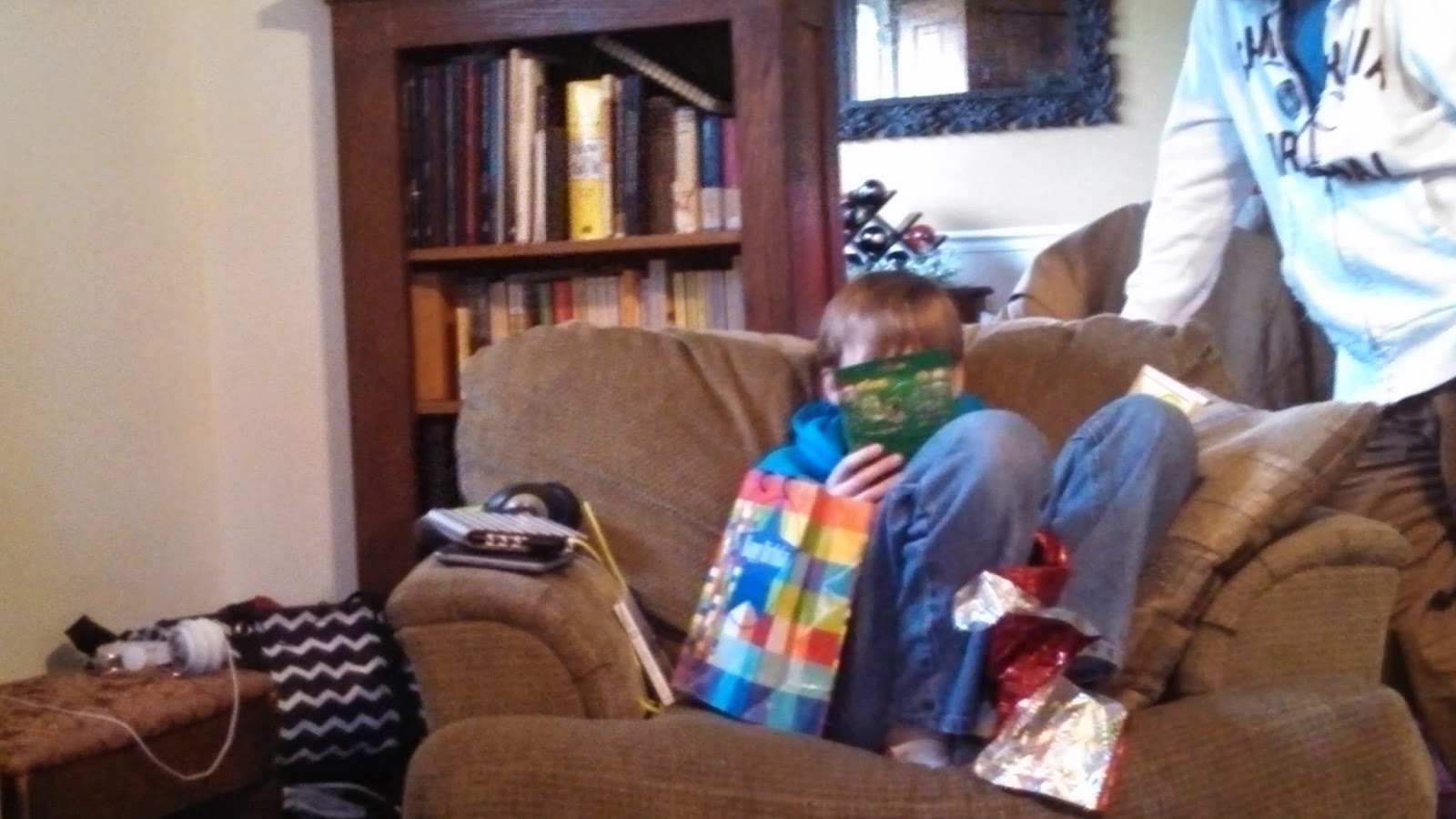 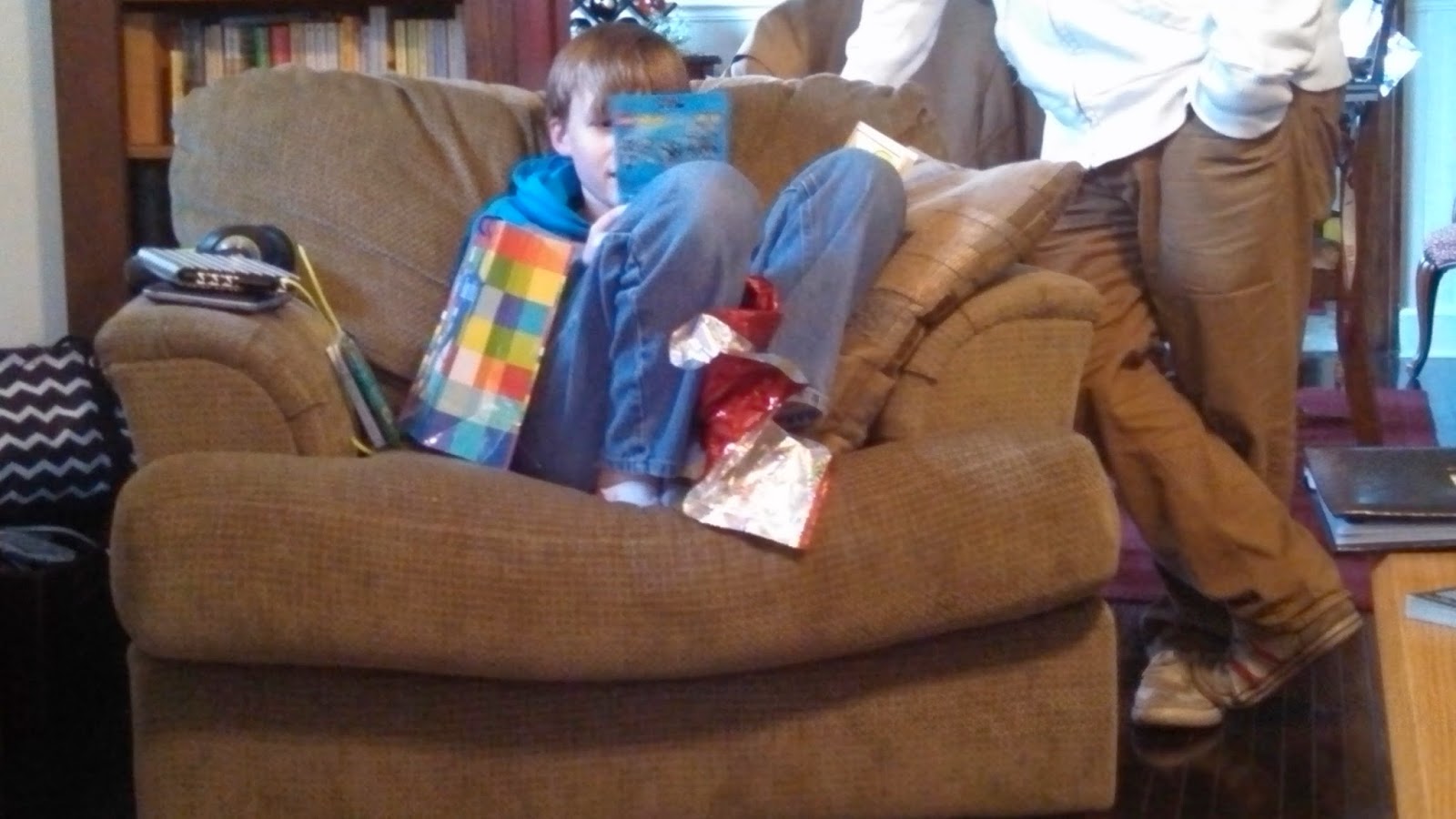 Happy Birthday Jo. We live & miss you! The Emores 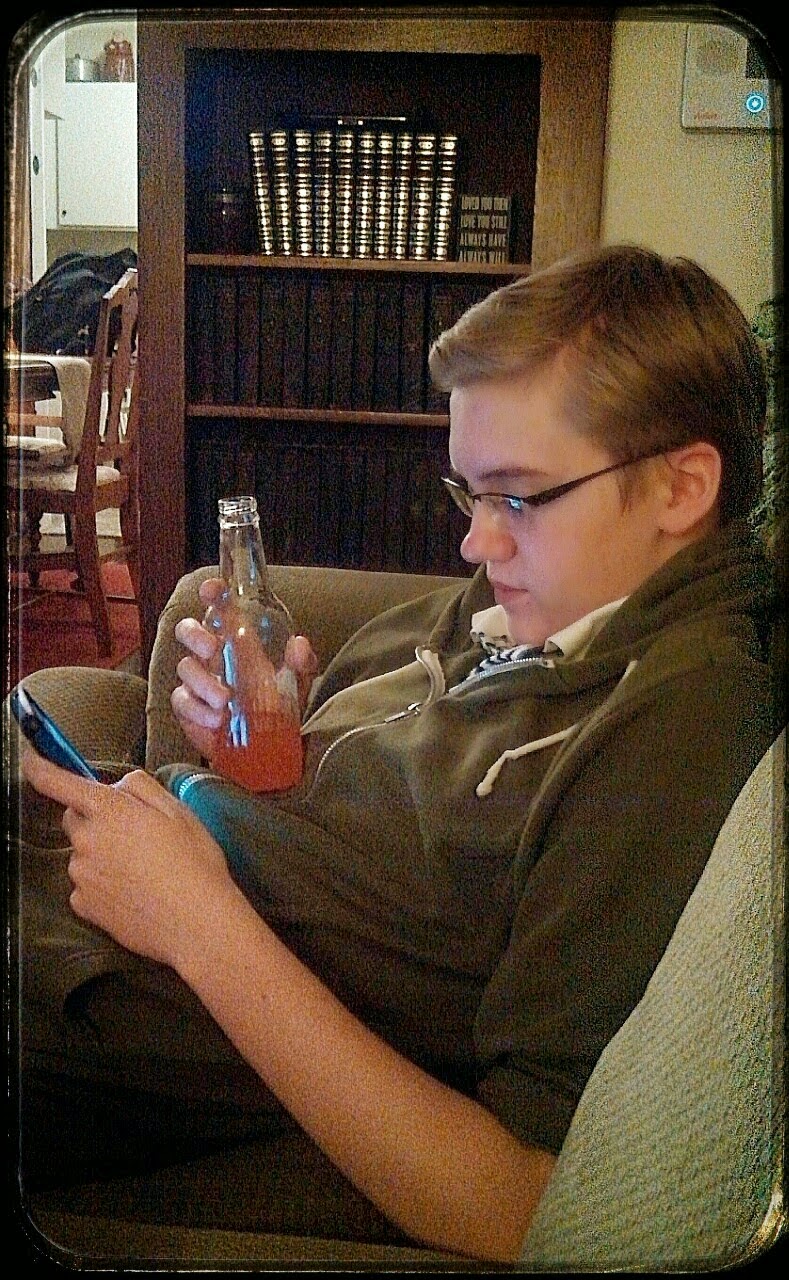 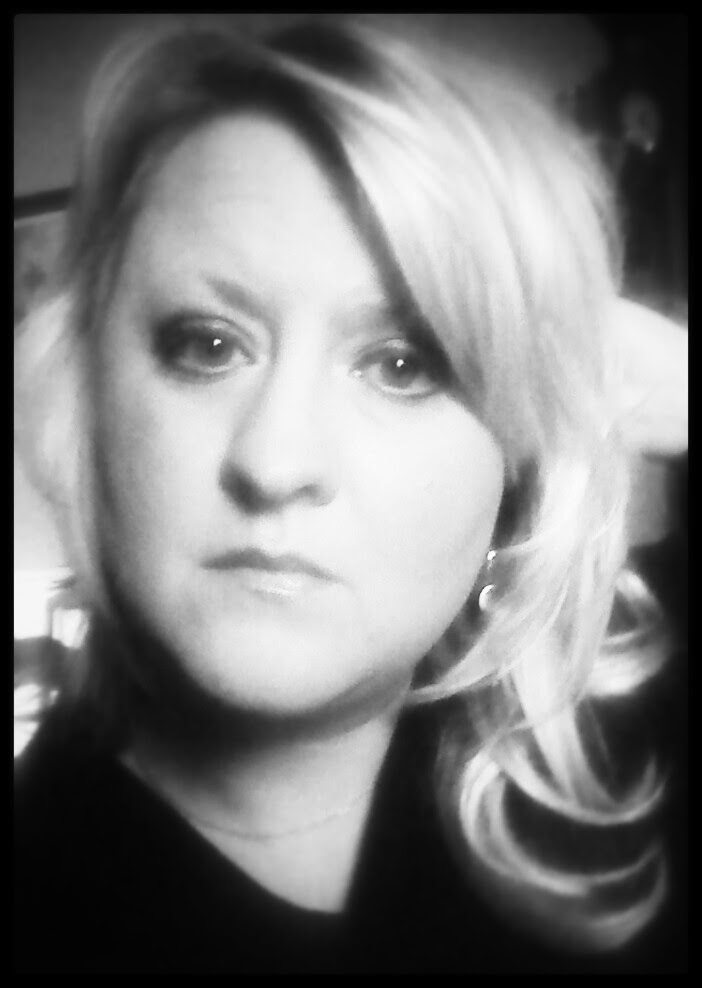